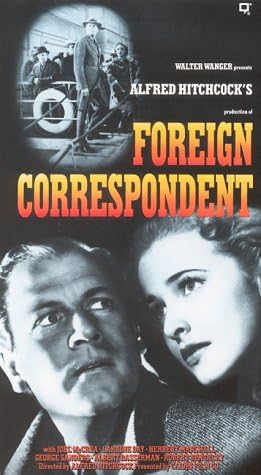 The first of Alfred Hitchcock's World War II features, Foreign Correspondent"span" was completed in 1940, as the European war was only beginning to erupt across national borders. Its titular hero, Johnny Jones (Joel McCrea), is an American crime reporter dispatched by his New York publisher to put a fresh spin on the drowsy dispatches emanating from overseas, his nose for a good story (and, of course, some fortuitous timing) promptly leading him to the "crime" of fascism and Nazi Germany's designs on European conquest.

In attempting to learn more about a seemingly noble peace effort, Jones (who's been saddled with the dubious nom du plume Hadley Haverstock) walks into the middle of an assassination, uncovers a spy ring, and, not entirely coincidentally, falls in love--a pattern familiar to admirers of Hitchcock's espionage thrillers, of which this is a thoroughly entertaining example. McCrea's hardy Yankee charms are neatly contrasted with the droll, veddy English charm of colleague George Sanders; Herbert Marshall provides a plummy variation on the requisite, ambiguous "good-or-is-he-really-bad" guy; Laraine Day affords a lovely heroine; and Robert Benchley (who contributed to the script) pops up, albeit too briefly, for comic relief.

As good as the cast is, however, it's Hitchcock's staging of key action sequences that makes Foreign Correspondent a textbook example of the director's visual energy: an assassin's escape through a rain-soaked crowd is registered by rippling umbrellas, a nest of spies is detected by the improbable direction of a windmill's spinning sails, and Jones's nocturnal flight across a pitched city rooftop produces its own contextual comment when broken neon tubes convert the Hotel Europe into "Hot Europe." --Sam Sutherland